How to get from Barcelona airport to the city centre 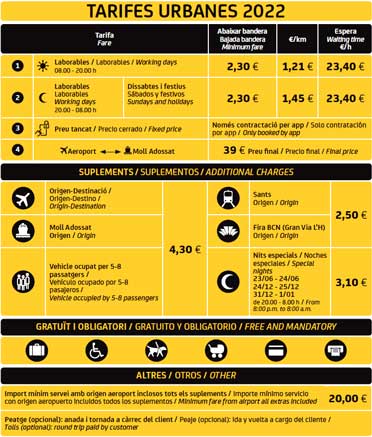 To get from the airport to the city centre (15 km) the most practical solution is to take a taxi. You can reach Barcelona downtown for approximately 35€, in less than 30 minutes, except for when there is rush hour or heavy traffic. There also are other means of transportation such as the airport shuttle or the subway (metro).

The airport has 2 terminals

Barcelona El Prat Airport (code BCN) is located 15 km south-west of the city. It consists of two separate terminals: Terminal 1, newly built, is where the main airlines are located, and Terminal 2, renewed for the 1992 Olympics, is where the Low-Cost companies operate.

From the airport to the city centre by taxi

This is the fastest option. Many typical black and yellow Barcelona taxis are waiting at the exit of the two terminals, you just have to follow the indications and stand in line.
It takes 20 to 30 minutes to reach the city centre, and up to 1 hour during the week around 9h and 18h, when access to Barcelona is saturated by rush hour.
Average cost: 35€ to go from the airport to the city centre.
Fares are normally displayed on the rear windows of taxis (see illustration). In addition to the price registered by the taximeter, there is a surcharge for the airport (4.30€).
From 2020 there is no more surcharges for luggage independently of their size.
Taxi drivers are relatively honest, systematically use the taximeter and the problems occurred in the past have decreased, but watch for the application of supplements (entering and leaving the airport, port, station or exhibition fair as well as when the taxi occupancy is more than 4 people). .
If you suspect that the driver is charging you an excessive price, ask for a receipt ("quiero una factura"), which is generally a deterrent and will allow you to file a complaint in case of abuse.

A shuttle bus that takes you to Plaza Catalunya is also a good solution to get to the city centre.
Frequent departures 24 hours a day, the bus only has 3 stops in the centre (Plaza España, Gran Vía - Urgell, Plaza Universitat) the terminal being the Plaza de Catalunya.. These buses are fast and practical, offer a large area for luggage, air-conditioning and free wifi.
Tickets can be purchased in advance on their website, at an automatic vending machine at the bus stop or with the driver when entering the bus. Duration 35 minutes, depending on the traffic. Price 5.90€ one way or 10.20€ return (valid 15 days).
They also offers combined ticket which also allows you to use the public transport network for a single trip or for several days, consult the website to see all the possible combinations.

Start or end your Barcelona tour in the airport

If you have little time, or if you arrive early and you still cannot get your hotel room, we can wait for you at the airport with a private vehicle for a panoramic tour of the city, which will allow you to discover the points of interest, then we drop you off you at your hotel or apartment.
Likewise, the day of your departure, if you leave at the end of the afternoon, we can pick you up at your hotel, make a visit of your choice, your luggage being safe in the car, then drop you off on time for your flight at the airport, and if you wish, accompany you to the check-in.