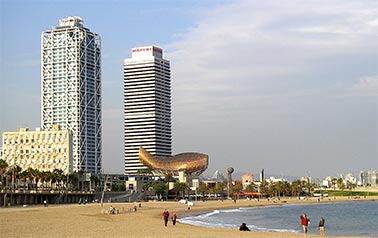 What's more beautiful when you are than waking up when you see the sun rise on the Mediterranean… to be able to step out of your room and walk on the sand. The dilemma of deciding whether to swim in the hotel pool or in the sea…
A very limited selection of luxury hotels offers these possibilities that will enhance your stay in Barcelona.

Until a few years ago finding a hotel on the beach, or near the beach was impossible in Barcelona. Because of the industrial past of the city, the neighbourhoods bordering the sea were mainly industrial and Barcelona offered only a few reduced areas on the sea. In order for Barcelonan’s to enjoy the beach, they had to go on weekends to the surrounding cities like Castelldefels, Sitges, Masnou, causing upon return to the city, on Sunday evening, memorable traffic jams…

Everything changed in 1992 with the Olympics. A vast transformation program to create neighbourhoods close to the sea was undertaken, abandoned factories were bulldozed to build the Olympic Village and many beaches and neighbourhood facilities were developed, offering Barcelonese more than 5km of beach.

We have selected the most beautiful hotels on the beaches of Barcelona for you:
There are only two hotels built on the beach, we have added a third which can be considered "almost on the beach" and offers rooms and a pool with stunning views of the sea.

Its construction provoked a major controversy because it was built on the water, taking advantage of an enlargement of the port, thanks to a free interpretation of the law that protects the coastline which doesn't allow constrution on the coastline.

With 98.8m height it offers 473 rooms with breath-taking views of the sea and the city.
On the 26-floor a panoramic bar offers cocktails and a unique view of the city.
It houses two restaurants, the Wave and Bravo24 from the chef Carlos Abellán with a Michelin star.
Two swimming pools and a beach club on the beach complete the offer of this extraordinary hotel.

Built between 1991 and 1992 to house the Olympic Committee at the 1992 Olympic Games. The 154-meter high, 44-storey hotel has been occupied by a Ritz-Carlton hotel since 1994. The top 9 floors are occupied by luxury apartments: duplexes, some with terraces.

This very modern building with its visible metal structure pleasantly surprised the inhabitants of Barcelona.
An urban legend in Barcelona said that soon after its inauguration explaining that because it had been built very quickly to be ready for the Olympic Games, it was leaning and should be dismantled and rebuilt once the Olympic Games ended. Which of course did not happen.

In front of the hotel the metal sculpture representing a fish in a dish is the work of Frank Gehry.

The hotel offers two swimming pools, a luxury spa on the 43rd floor with panoramic views, numerous bars and several restaurants including the Arola restaurant, contemporary and creative cuisine and the two Michelin stars Enoteca by Paco Pérez.

Located a hundred meters from the Hotel Arts Barcelona Skipper Hotel is more discreet than the previous two.

It offers the comfort of a 5-star hotel. It has two outdoor pools, one of which is located on the roof and offers a beautiful view of the city and the sea.
Some rooms have sea views and the beach is a 2-minute walk away.